Top
Home » Tip Of The Week » Celebrating God With Us 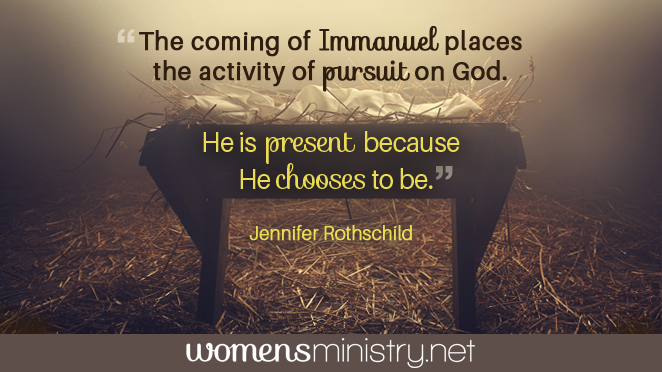 “No one has ever tenderly pursued me,” my friend sighed. I felt the pain of her heartbreak as we talked over the invisible burdens we carry.

I have never forgotten her statement. Her words resulted from a father who abandoned her, a mother who showed no gentleness and a husband who passively responds rather than actively initiates. Her statement of longing reflects our deepest need — to be tenderly pursued by someone — not because we deserve it, but just because we are.

We Need a Pursuer

God became Immanuel to meet our deepest need. Immanuel — so familiar to us in Christendom.  If you were asked, “What does Immanuel mean?” chances are, you could quickly spout, “God with us.” You’d be exactly right, yet knowing the meaning isn’t the same as being deeply touched by the Person.

We too often simplify Immanuel’s profundity by seeing His coming only as God’s presence, proximity or promise. He is with us, near us and won’t ever leave. Though true, the most beautiful picture of Immanuel reveals God’s tender pursuit of the people He loves. Immanuel doesn’t mean “Us with God.”  Immanuel means God with us.

The coming of Immanuel places the activity of pursuit on God. He is present because He chooses to be. We are mere responders and receivers.

You know what we did to be with God? Nothing. And we’re incapable of being with God without His grace. And without Immanuel.  We need a God with us because we are unable to be with Him…without Him. He initiates companionship. He draws us to Himself. He pursues us tenderly.

We have a God with us.  Many world religions have gods that demand “us with god.” Work. Strive. Please. Clean up. Try harder. Be better. Pursue him. Then, just maybe, god is with us. Christianity has the One true God Who seeks to be with us and makes it possible for us to be with Him.  There are requirements for being with Him, though, and He met them all for us. Through Christ, we are reconciled with God. (Colossians 1:19-22)

Leave a Comment: How does understanding God’s pursuit of each of us change or shape how you lead?

Jennifer Rothschild is a best-selling author and Bible study teacher and founder of womensministry.net. To learn about how God sees you, check out her newest book, Invisible. Find details at theInvisibleBook.org.  Facebook Twitter Blog