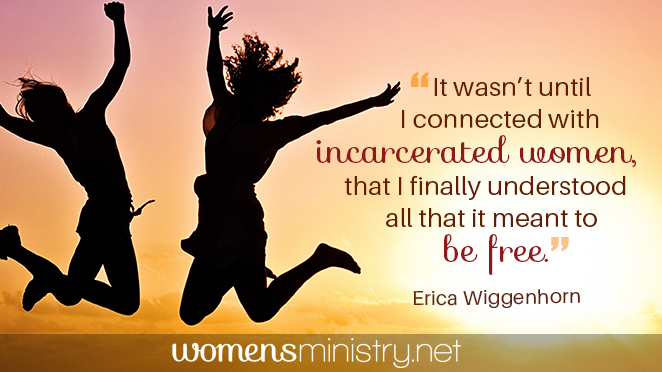 I don’t know of a Christian on earth who would argue that prison ministry isn’t biblical. Jesus Himself spoke of visiting the prisoner in Matthew 25.

The paradox of prison ministry is that it wasn’t until I freely walked into a place of confinement, the dark, desperate prison yard, that I realized my own chains. And it wasn’t until I connected with incarcerated women, that I finally understood all that it meant to be free.

A lot of times people approach prison ministry out of care and concern. Those who are free are going to minister to those who are bound. Christians go to teach the Word of God, share the love of Jesus and emphasize walking by faith.

Ironically, many of the women I taught knew their Bible more thoroughly than I did and held greater faith in the power of Jesus than I had ever exhibited. While I came into the yard to teach, I left as the learner, realizing areas of my own life that were bound by doubt and unbelief.

I proudly represented a socially successful person. My life required little faith because I lived in a place of abundance. Yet these attitudes were just as heinous to God as selling drugs or my body, robbing convenience stores or murdering someone in order to survive. They were physically confined due to their sin, yet I was bound emotionally and spiritually.

I wallowed in shame, reeled in pride, celebrated my self-sufficiency and became paralyzed by fear that I might not have or be enough. The women I served rested in the abundance Jesus offered, not their bank accounts, social status or job title. They believed they were enough because He said so.

And as God knit our hearts together, over time, He set all of us free. They exited the prison gate to a new life of freedom. And so did I. Freedom to say, “I am enough because He said so” and actually believe it. And to live in that freedom in such a way that I no longer shackled myself with labels to be accepted.

When you discover the paradox of prison ministry, you receive more than you give, you learn more than you teach and you’re released from your own sin and emotional chains more than you’ll ever offer freedom to another. But then again, isn’t that paradox of Jesus Himself?

→ Erica shared the steps to starting a prison ministry in this article for members of womensministry.net. Not a member? Learn more here.

GIVEAWAY: Leave a comment sharing how this post has inspired or encouraged you and be entered to win a copy of Erica’s new Bible study, An Unexplainable Life. Winner will be randomly selected from comments left by December 7, 2016.

Erica Wiggenhorn is the founder of Every Life Ministries and author of the Bible study An Unexplainable Life: Recovering the Wonder and Devotion of the Early Church (Moody Publishers, July 2016). The study covers the birth of the church as outlined in Acts. She spent two years mentoring incarcerated women and teaching the Word of God in the Arizona State Prison. Connect with Erica at EricaWiggenhorn.com.