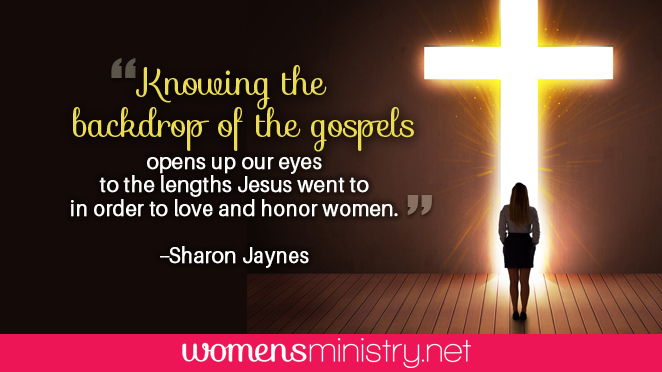 As a Bible study teacher, small group leader or women’s ministry leader, understanding the culture in which Scripture was written can open up a wealth of understanding that we might miss if we simply read the Bible with our twenty-first century eyes. As we understand the culture that Jesus stepped into, we see just how radical His ministry, messages and miracles were. We catch a glimpse of just how much God cares for us.

For example, in Genesis we see that woman was created to be a co-image bearer of God. She was the crowning touch of God’s creative genius and the grand finale of His magnificent work of creation. When God fashioned woman, what was “good” became “very good.”

But by the time Jesus was born, His first cry echoed the heart-cries of women who had been misused and abused for centuries. When Jesus took His first steps onto the dusty ground of Galilee, women were not allowed to speak to men in public, testify in court or mingle with or eat with men at social gatherings. They were not allowed to sit under a Rabbi’s teaching to learn and were kept sequestered on a lower level in Solomon’s Temple or behind a partition in the local synagogues.

During Jesus’ day women had no rights, could be divorced on a whim and were considered property — first of their fathers and then of their husbands.

Knowing the backdrop of the gospels opens up our eyes to the lengths Jesus went to in order to love and honor women. Every single time Jesus interacted with a woman, the God-made-man broke the man-made-rules of His day to honor and bring dignity to women. He risked His reputation to save theirs…and yours…and mine.

Jesus welcomed the worshipful anointing of the woman with the sinful past, even though the religious leader thought it scandalous. (Luke 7:36-48)

Jesus called the woman with the crippled back forward into the men’s area of the temple, even though the synagogue ruler thought it inappropriate. (Luke 13:10-17)

Rabbi Jesus welcomed Mary of Bethany to sit as His feet to learn, even though women were forbidden to do so. (Luke 10:38-42)

Jesus revealed His true identity for the first time, that He was the Messiah, to a woman — the Samaritan at the well. (John 4:26)

Jesus’ longest recorded conversation was with a woman, which astounded his disciples. (John 4:5-27)

Jesus entrusted the most important message in all of human history – that He had risen from the dead – to Mary Magdalene, and then He told her to “go and tell.” Unheard of. (John 20:11-18)

Jesus accepted women right where they were, and challenged them to be more…and He still does today.

So here’s a ministry tip for you this week. As you delve into the Scripture, take some time to discover what the culture was like at the time. When you do, you’ll discover magnificent truths you’ve never seen before.

BONUS: Leave a comment sharing how understanding the cultural context of Scripture has impacted your personal walk of faith and be entered to win How Jesus Broke the Rules to Set You Free by Sharon Jaynes.

Sharon Jaynes is a conference speaker and author of 19 books. She is co-founder of Girlfriends in God whose daily devotions reach over 500,000 emails each weekday. Sharon’s newest book release is How Jesus Broke the Rules to Set You Free (watch the book trailer here). Learn more about Sharon’s books, Bible studies and speaking ministry at sharonjaynes.com.